Kanye West recently dropped some official visuals for his ‘Life Of The Party’ that features André 3000 on the full version because this drop only highlights Ye’s performance. Throughout the video, we go back in time as old images of Kanye West are repurposed to present something new. The old pictures of Kanye are reused in away that has hm performing his verse through them which is pretty cool to witness as it hits on that nostalgia tip which reminds many of the journey Ye has gone through to get to this point. ‘Life Of Party’ features on the deluxe version of Donda which dropped back in November. 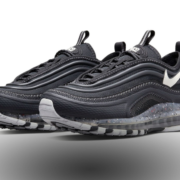